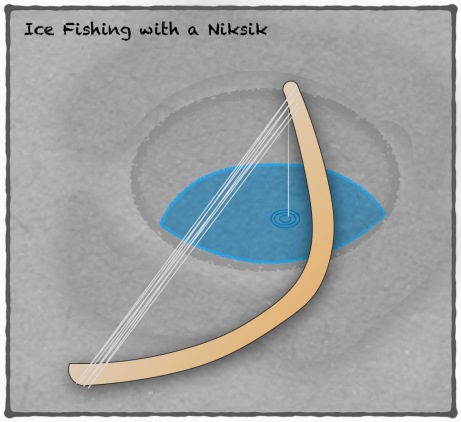 Harvesting fish from beneath the frozen lakes and rivers of the Arctic/sub-arctic regions was a critical part of the subsistence lifestyle for most north-country native Americans. There were typically three methods for harvesting fish: traps/nets, spearing from “dark house”- like tents or simply kneeling down beside a hole and dropping a hand line down through the ice. Let’s look at the last method as it has applications today in an emergency situation due to its effectiveness and simplicity.

The native ice fishing “rod and reel” set up consisted of either two sticks or a deeply-arched handle (wood, antler) called a niksik. Both utilized a line attached to the end of one of the sticks or end point on the niksik to which a lure or barbless hook was attached. Both methods let the angler wind string up/down by simply rocking his/her wrist back and forth which allowed the line to feed to/from its windings as the sticks/handle tip moved from side to side.

With the two-stick method, the line is attached to the end of the first stick, and wound around both sticks until all the line was coiled onto the ends of the two sticks. Once baited, the hook is lowered down into the water by simply unwinding the line from one stick to the other until the desired depth was attained.

Upon hooking a fish, the angler used the free stick to catch the line in the water and pull it sideways, parallel to  the other stick. The process was reversed and the hook line stick was used to gather the line now hanging from the other stick and pull it back, raising the line that much further again. The back-and-forth process was repeated until the angler could haul the line and fish up and beyond the hole and then shake off the catch onto the frozen lake/river surface.

Another great advantage of this simple tool is that you can operate it with your gloved or mittened hand.  With the added advantage of not having a barb on the hook, a deft ice angler could raise or lower the bait, hook a fish, bring it up the hole, out onto the ice and shake off the catch – all without removing a glove or switching hands for any reason.

While re-baiting the hook would probably require a bare handed effort, once the bait was in place, the hands could be covered again and fishing could commence – right along through to the “catching” part of the process.

This site uses Akismet to reduce spam. Learn how your comment data is processed.